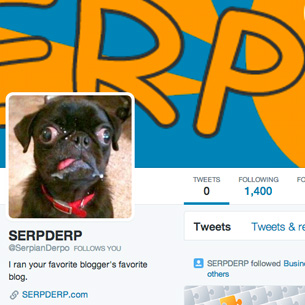 I don’t have to explain the significance about this to any of you amateur numerologists out there. I know some of you saw this day coming since the very start, you’re observant and you can pick up clues. This has never been a secret, anyone who can read between the lines always knew what my next move was going to be. It was designed that way.

I know some of you are still scratching your heads like, “Who the fuck is this SERPIAN DERPO guy and where did he come from?” Don’t worry, I’m going to spell it out for you. You’ll learn more about marketing in the next 5 minutes than from any eBook or conference.

@MercenaryCarter has kindly lent me his blog to address my audience one last time.

First of all, let’s talk about the elephant in the room. A lot of you are stil convinced that SERPIAN DERPO = CCARTER. In order to understand why that’s incorrect, you need to look below the surface level. I know that’s tough for a lot of you wannabe marketers, but try to keep up…

Marketing is about seeing an opportunity and taking advantage of it. You can plan and strategize all day, but if you can’t pivot to take advantage of a situation then you’ll only ever be playing catch-up to the real marketers. @MercenaryCarter, say what you want about him, that dude’s a real marketer.

CCarter found SERPDERP early on and liked what I was doing and what it was all about. Game recognize game. Most of all he saw it as a chance to ride the wave and help make his newest project a household name. If you couldn’t figure that out, you might be an idiot. It might be time for some serious self-reflection. It’s called a mutually beneficial situation. He helps bring incredible amounts of traffic to SERPDERP by lending me his authority, and I help keep his project on your minds day after day until you hit the sign-up button. From the very first day that SERPDERP launched, I’ve had the ears of some of the most talented marketers in the game. When SERPIAN calls, you answer… even if it’s because you think it’s CCarter. I’ll take it.

It’s sad how clueless a lot of you marketers are, you can’t even see one level below the surface. “OH, SERPIAN HAS A BANNER FOR SERPWOO??? THAT MUST MAKE HIM CCARTER!!!”

I’m not CCarter, in fact I’m much scarier than CCarter because he’s a marketer and his agenda is always transparent in the most brilliant way. If you have half a modicum of marketing prowess, you’re looking at this whole debacle with a grin and thinking, “Well played, boys.” Me, on the other hand, I’m a caged gorilla but the zookeeper’s gone for the night and he forgot to lock the door.

If you can’t piece that together, then I know a scorpion who’s looking for help to cross the pond.

That’s how I took a brand new site from zero to thousands in under a month, and ultimately tens of thousands in under two. I didn’t do it alone. Leveraging relationships, it’s the most powerful form of marketing you’ll ever find. SEO? Yeah right. Why spend months and thousands of dollars trying to hijack the SERPs when I can spend 5 minutes borrowing someone’s authority? I would still be waiting for G****E to start sending me traffic.

I’m amazed some of you didn’t pick up on the irony of a site called SERPDERP that got none of it’s visitors from search engines. In fact, I built it all on a penalized domain that had been spammed to hell and back by some WSO guru years ago.

Anyways, now that that’s out of the way…

I’m not here to focus on the negative.

There are also a lot of great people in this industry, who showed their true colors. I’m not here to name names, but these folks understand what satire is, they are able to laugh at themselves from time to time, and most importantly they are honest and upfront with their clients. These are the ones who really suffer from all of the snake oil cockroaches out there, because these people are putting together realistic proposals rather than the clowns who promise the world and end up sending fake traffic when they aren’t able to deliver.

If you were a friend of SERPIAN DERPO, you know who you are and I promise there are bright things in your future. You’ll be getting referrals, you’ll be getting positive mentions in the media seemingly out of nowhere, and you’ll be enjoying bountiful times for years to come because you earned it. Any time you’re in trouble or you need help, you won’t have to look far. You’ve made more friends than you will ever realize. You’re on the nice list now.

WHY THIS? WHY NOW?

There has always been a kill-switch put in place. When traffic hit a certain plateau, it was game over and that’s been out of my hands since about week number two when it was initiated. Did any of you notice how I was closing down the site recently for a day at a time? That’s when traffic was getting close to the mark. I wasn’t quite ready yet. Now, I’m ready. It’s time.

How many bloggers do you know that would close their site on the day it hit it’s highest traffic ever? Yet they want to call ME an attention whore, while trying to ride my coattails behind closed doors. When you surround yourself with snakes, don’t be surprised when your veins become filled with venom. That’s what snakes do.

NOW MOST IMPORTANTLY, WHO IS SERPIAN DERPO?

If you still haven’t caught on, there is no single entity. SERPIAN DERPO is a collective of people. I know some of you figured that out very soon, whether it was the contrast in writing styles or simply the fact that there’s no way one person could have been everywhere at once, or had a dozen sets of eyes and ears. Pat yourselves on the back.
Did you ever wonder why it seemed like there was always a guardian angel looking over my shoulder? I wasn’t kidding when I told you that anytime someone made a threat, I had to tell SEVERAL people to back off, to not retaliate, and to not destroy the aggressor’s sites. After all, these are peaceful times, remember?

There’s the authors working tirelessly behind the scenes to keep the story moving forward.
There’s the stage-hands who make sure everything kept running smoothly, despite constant attacks.
There’s the ticket-scalpers and the thieves outside, who sold each other out in a heartbeat.
There’s the special guests who lent me their affiliate links and audiences.
There’s the SEO Industrial Complex laughing all the way to the bank.
There’s the critics, who sit at their keyboards commenting on things they don’t even understand.
And there’s a wide-eyed audience enjoying every second of it.

Everyone had a role to play, and everyone played it perfectly. Whether you were an innocent bystander, or you tried to get in the way, even if you don’t realize it – you were a part of the show.

I want to thank all of you for helping create something special.

Please remember, there’s a little bit of SERPIAN DERPO inside of everyone, especially your sister. When I’m not making her cream and squirt all over my neckbearded face, I’m bringing the entire internet to it’s knees so I can unload rope after rope of brilliant content. (SEO bloggers take note, “brilliant” is the new “quality”.)

Sometimes, the show mustn’t go on.

That’s a wrap, ladies and gentlemen.

“Once you realize what a joke everything is, being the Comedian is the only thing that makes sense.”

4 thoughts on “FROM THE DESK OF SERPIAN DERPO”